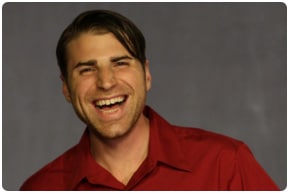 Neil brings a fresh and contemporary perspective to creative storytelling. He has a strong digital media and technology background, and zest to see Merging Media’s video projects through…from concept to completion.

After graduating Penn State in 2008 with a Bachelors in Film/Video, Neil continued his career in Visual Effects as a compositor, commercial producer and music video director.

Neil has produced and distributed video content across the Internet, generating thousand of “reads” on his blog posts and millions of video “views” worldwide.

In his other life, Neil is an accomplished and award winning VJ and projection mapper. He authors a blog under the name of ProjectileObjects. Check it out here:

Neil loves to fly kites, play piano and watch the clouds pass by. He is a teacher and student of life, and can typically be found walking around the office barefoot.